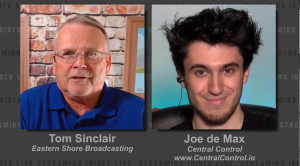 Central Control developer and owner Joe de Max made an appearance on Tom Sinclair’s Streaming Idiots show this week, to discuss Central Control, it’s history and the new features in V1.1. Topics discussed included MIDI control of vMix instances running on Amazon AWS, Central Control’s layering system, seemless mapping of multiple devices and much more. As Tom Sinclair said, “This is a game-changer!”. Tom also said the software should retail for a minimum of $300, and that Joe – the developer – was giving it away at the ridiculously low price of $49. Catch the interview below and download your 30 day trial! Catch Streaming Idiots every Wednesday at 2:30PM EST either on their Facebook page or YouTube channel.

It is with great excitement that I today announce the release of the latest version of Central Control, V1.1. Featuring 8 new devices and many improvements and bug fixes. Head over to the download page to get it now! Also see the demo video below!

Bug fixes:
Fixed bug where logarithmic feedback values from vMix were not correctly being converter to linear.