Central Control 2.1 is all about providing invaluable production tools for video 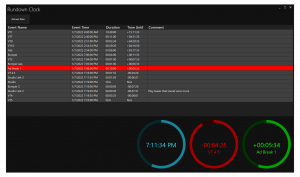 producers and live streamers alike. Rundown Clock allows users to create their show rundown in familiar spreadsheet tools such as Excel and Google Sheets, then access it in the Rundown interface. The Rundown interface gives directors and producers critical information such as the duration of each event and the time since or until an event. In addition to this, the GPU rendered production clocks display the time of day, time until the next event, and the elapsed time since the current event started. For Elite customers, Rundown Clock can be paired with Central Control’s Triggers system, allowing for automation of a show based on the rundown.

The RunDown Clock tool is not alone, as Central Control 2.1 also introduces a new NDI output device. When paired with the Rundown Clock, it can be used to send the production clocks out as an NDI source ideal for use in multiviewers. All three of the production clocks are available, as well as Dual Clock view showing both the countdown clock and the elapsed time clock in a single video stream. NDI output can also be used to send valuable information such as time remaining displays for video playback on systems such as vMix and NewTek TriCaster. These are rendered with alpha channel making them ideal for use as an overlay channel in the talent’s confidence monitor.

Central Control founder and developer Joe de Max said “The new Rundown Clock device allows users to create show rundowns in familiar applications without any formal training, meaning not only can producers and directors create show rundowns, but also volunteers not familiar with the traditional tools. Combined with the Triggers capabilities of Elite, this provides some exciting automation capabilities”.

Central Control 2.1 is available immediately as a free upgrade for all existing customers, as well as a free 30 day trial.

NDI Is a trademark of Vizrt Group