Central Control 2 is avaliable from today, with 12 new devices, loads of new features and countless improvements. Let’s take a look at some highlights!

Triggers
Triggers allow you to conditionally map commands based on events. Take for example a Blackmagic ATEM based setup that also had vMix being used for video playback. A trigger could be set up to make vMix auto roll when it was on program, and then another trigger could be setup to transition back to preview when the video finished playing. 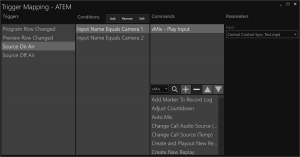 Timecode Input
Timecode is used in live shows to synchronize lighting, video, effects and much more. Lighting consoles and media servers have always enjoyed support for this, however video switchers, audio mixers, Microsoft PowerPoint and even smart bulbs. have typically been left out.  No more. By combining the new LTC or MTC timecode device with the new triggers functionality, you can trigger events on any device in Central Control based on incoming timecode.

X32/X-Air support
Central Control 2 now provides support for the Behringer X32 and X-Air series of mixers. Ideal for adding a tactile control surface to one of the rack mixers. Alternatively you could use this in conjuction with triggers. For example – to automatically mute microphones when you roll a video in your show

Supersource Animator.
If you own a Blackmagic ATEM with SuperSource, you’ll know how powerful it is for compositing multibox shots. 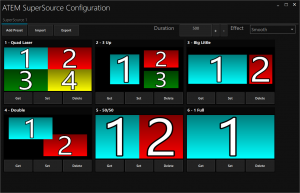 Central Control 2 allows you to leverage this functionality using what we call the SuperSource Animator. SuperSource Animator allows you to create presets by taking Snapshots of the current layout. You can then easily animate between these presets, with multiple transition effects to choose from. Better yet, when used with a StreamDeck it will even provide thumbnails of the presets of the buttons!

Command Splitter
A common request is the ability to control multiple of the same device in a mirrored configuration. For example – mirrored vMix systems used for video playback. Previously in Central Control this meant having to map the same commands over and over again for each device being added. This was both time consuming and error prone. Now with the command splitter, you can pick a device as a source, and then split all the commands routed to it to up to 4 follower devices of the same type.

Rapid Control Mapping
Quick assign has been in Central Control from the beginning, and has allowed for really fast mapping of controllers. But we can do better! In Central Control 2, you can select multiple controls in the list, and right click to add commands. It will then map all of the selected controls for you, incrementing the relevant parameter as it goes along. Using this you can easily map a controller in minutes. You can also right click controls to copy/paste all of its commands, as well as deleting all commands assinged to a stack. It’s also now possible to clone layers in the device mapping window!

Editions
Central Control 2 will be available in 3 different tiers – Intro, Pro and Elite. Intro provides an entry level version for users just getting started. Pro provides unlimited devices per project and powerful features such as SuperSource Animator. Elite gives users advanced automation features such as Timecode Input, Triggers, Command Splitter and much more, as well as Elite tier devices such as those for Sienna Processing Engine.

The great news is that anyone who has already bought a copy of Central Control over the past year has automatically been upgraded to Pro at no extra cost. Upgrades between versions are possible at any time by simply visiting the Central Control website and paying the difference in price.

High DPI support (yes!)
Big UI performance improvements.
Command multi assign. Select multiple controls and assign commands in one click.
Clone layers!
Voice Command device greatly improved
Device custom UIs are now no longer dialogs, meaning more than one can be open at once (Very useful for SuperSource animator)
Loads of new commands here and there
Many new commands
Improved OBS module
Licensing model more tolerant of systems that are not connected to the internet
ATEM SuperSource Animator Create presets for SuperSource then animate between them using a variety of effects